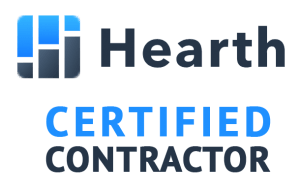 Marvin is a master craftsman; his work is beautiful! He and his crew are very professional and the quality of the work is excellent! I would recommend him to anyone looking to greatly improve their home at a very reasonable price."

Harsh temperatures, raw winds and snow drifts take a toll on hardscape in winter. That includes all your paver walkways, paver patios and steps plus poured concrete surfaces. Nowhere in Madison WI escapes.

When the storm passes the brilliant blue skies and warming sunshine make shoveling more enjoyable  but they contribute to additional concerns. Blowing and drifting snow is one thing. Ice is another. And ice is the biggest threat to your family and property. Melted snow refreezes on walks, patios and driveways. On flat surfaces it can be treacherous. Building up between pavers in can cause extensive damage.

You have to get ice off your hard surfaces as soon as possible, right? Of course you do, but how? You shovel and snowblower do a good job of removing most of the snow. Unfortunately they often leave a thin film that makes the hard surface beneath even more slippery.

So, you pick up some commercial “ice melt” and treat your walks, patios, porches and driveways just like the locals treat the roads. That can be a big mistake! Common rock salt (sodium chloride) works fine on asphalt roads and driveways but it’s like putting acid on other hardscape surfaces.

Common, every-day rock salt should not be used on poured concrete, cement pavers or natural stone. It can literally eat away the surface.

De-icers’ Threat To Hardscape In Winter

Why, you ask, is salt so bad, it’s been used for years? When salt combines with melting snow the freezing point of the salty water drops below the freezing point of plain water. It may not freeze until the temperature hits something like 20 degrees. As temperatures fluctuate above and below 20°F the salt brine thaws and refreezes. As the solution seeps into cracks and the porous surface if concrete and freezes it expands. Cracks get wider and the hardscape surface shows blemishes. These blemishes, over time, become serious issues. The threat from the freeze/thaw cycle is real for poured concrete, natural stones and all kinds of pavers.

Lasting effects of salt include:

OK, you’ve weighing the options – leave the ice and risk falling or worse, or use salt and deal with damage later. You have better choices. There are several commercial ice-melts that have even lower freezing points than rock salt – so they thaw/refreeze less often. And, many are certified as safe for pets. Your best choices for removing ice from hardscape in winter include:

The best advice from a hardscape installation professional: read the label of any product you’re considering so you know what you’re putting down.

Plan Ahead For Snow, Ice Removal

When you know there’s a likelihood of snow and ice, plan ahead to deal with it. There are simple steps to keep hard surfaces clear and safe. Including:

II you have a concrete paver patio you may have less to worry about. Pavers don’t react to the freeze/thaw cycle like poured concrete surfaces. Why?

There’s another alternative to chemicals for treating ice on walks and driveways: sand. It doesn’t have the melting properties of a chemical but it protects you from slipping. It is safe for landscape plants, too.

Long-term Care For Hardscape In Winter

Unfortunately, in Madison you’re not going to get through a normal winter with just one or two snow storms. You’ll have to deal with ice and snow on walks and surfaces for several months. You’re faced with making surfaces safe while protecting their future, right? Here’s another idea: mix sand and an ice melting chemical so you’re using less of each. And, when the ice is melted or at least crumbling, clean it off the surface. Removing the remaining ice also removes the extra chemical so it doesn’t sit there. Be aware that just pushing it to the side of the walk isn’t a great idea. Pushing all the treated ice and snow to one place concentrates the chemical there, too.

Finally, as you plan ahead for winter care make a note to wash pave patios, decorative concrete surfaces, walks and driveways as soon as the weather allows. Flush away any leftover chemical – and be sure to dilute it with plenty of water so it doesn’t harm the lawn and landscape.

If you have questions or concerns over how best to care for your hardscapes in winter, consulting a professional is an option. Have you invested in significant home improvements including hardscapes? Expanding your outdoor living with a new patio, retaining walls, walks and specialty features like multi-level seating areas, fire pits and an outdoor kitchen represent sizeable investments. You want to protect them the best way possible, right?

Because they install all the latest paver and decorative poured concrete creations the professionals at Marvin’s Brick Pavers know how best to care for them in winter. Give Marvin Martinez a call at 608-630-8855. Or contact him via email. The crews are skilled in the installation of hardscapes of all kinds from concrete pavers, bricks, stones and decorative poured concrete. Marvin is ready to share his experience to protect your hardscape in winter anywhere in the Madison WI area.

How To Prepare Hardscape For Winter – HGTV